Hi again and welcome to another episode of the Operation Saylor. This is update number 3, corresponding to September 2022.

If you are reading this for first time, you might want to check Episode 1, where my plan and details are explained. That will get you in context. 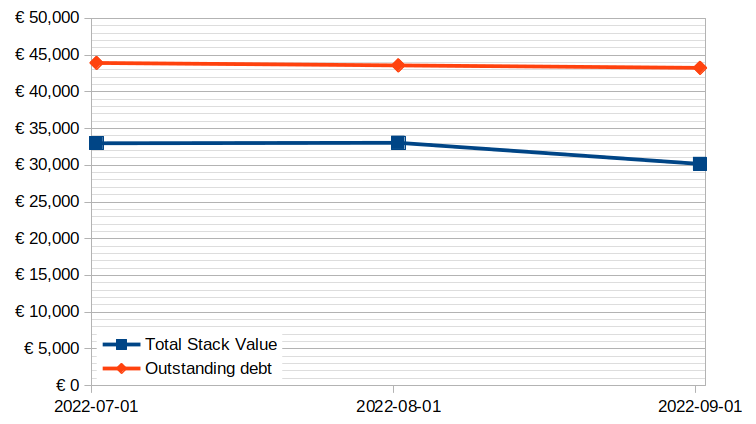 This past month I read through Jeff Booth's "The Price of Tomorrow". It was an ok read. I must confess I was very hyped about it since Jeff's appeareances in different interviews and podcasts are great, and everyone and their mother swear that the book is brilliant, but I was not that impressed. I felt the book covered the idea that we are heading towards a tremendously deflationary era interestingly, but there were many other contents which felt like dull, average-business-magazine level ideas, like the section on AI. Furthermore, I also felt a bit disappointed because Jeff makes a great point on how deflation poses a societal challenge since our current distribution of wealth through salaried labour will break down and we don't have an alternative for that now, but he didn't really discuss much what could be done about that.

Actively reading on ideas about deflation put the topic in the back on my mind and lately I kept on relating things in my daily life to deflation. A few days ago, I was watching TV news and they pulled some charts with the demographic pyramids of a few countries. As it tends to be with these sections, the message was rather alarmist, warning about how the pension systems of a few countries in Western Europe would become unsustainable as a result of the low fertility (if only these demographic changes could be foreseen decades ahead, maybe then governments could have smoothly pivoted the pension systems to more adequate schemes instead of dooming future generations to be left holding the bag...) and how the economy would stop growing.

This desire for the population to grow constantly has always puzzled me. Why is it desirable at all? A friend of mine and I used to end up stuck at traffic jams every morning and we would joke about how our city would be so much livable if a plague came and we only had half the people around (woops). I guess there are many things nowadays which can only be sustained if the population growth rate stays positive, but is it truly negative if we lose those? Or is it just that sort of positive destruction that Austrian economics defends as healthy because it re-allocates resources into the right ventures?

I decided to get my hands on another book that talked about it and ended up reading "What to Expect When No One's Expecting: America's Coming Demographic Disaster". The book was rather naive, and the economics analysis was elementary-grade level (think of arguments such as "If the population declines, labor will be scarce, prices will go up, everything will be unaffordable", as if demand wouldn't decline as well). After reading the book, I was still left thinking that the only real trouble that I can attribute to a population decline is the unsustainability of certain pension models. Maybe I found the wrong book, or maybe I'm not crazy and there is really not so much to fuzz about. Perhaps some stacker can shed some light on the topic and recommend some interesting resources?

That will be all for this month. Thanks for reading and see you in the next one.

Hey, I didn't get what you mean with:

edit: ... okay, classic. After posting the comment I saw that in episode 1, there is already 5k € in bitcoin from the loan:

Great series! Excited for the next episode

The fault is mine, I forgot to fill that in and can't edit now

But you got the idea. The full picture looks like this:

See you around next month.