Just a thought: How about a limited block size model? There is only so many post allow per a particular time frame. As the noise level rises so does the posting cost, like the mempool.

If sub pages get created they could have there on mempool separate from each other.

175 sats \ 8 replies \ @DarthCoin 29 Sep \ on: What was your first reaction that lead you to initially dismiss Bitcoin?

Most of the maxis are old bitcoiners. In those times was quite hard to dismiss Bitcoin, only if you were a real ignorant or really busy with your hamster life.

In 2012, april I think, I went to buy some beers with 20 bucks in my pocket. On the way I met an old friend, that start talking about how he mine BTC (that time was still possible to mine with a GPU). So he ended by selling me 1 BTC for those beer money.

I went home and start reading more about Bitcoin, he indicate me to read the Satoshi's papers, so I did. My first thought was: damn... this is exactly what I was looking for to FUCK THE BANKS.

So I read and read and start reading the bitcointalk forum etc. I also start mining with a GPU, then with those Antminer USBs. I was fascinated by all the documentation and what can be done with Bitcoin. I NEVER STOP BELIEVING IN BITCOIN because I knew what is Bitcoin.

My wife asked me where are the beers and I said: I drink them with a friend. I never told her I bought "funny money" :)

So no, I never dismiss Bitcoin.

Does MicroStrategy know they can now advertise their Lightning job listings on SN for just 1 sat?

So far I've finished the foundation and framed the floor:

Later today I'll be laying down the plywood 😉

Indeed. Great to see a bitcoin only VC (Ten31) lead the round. 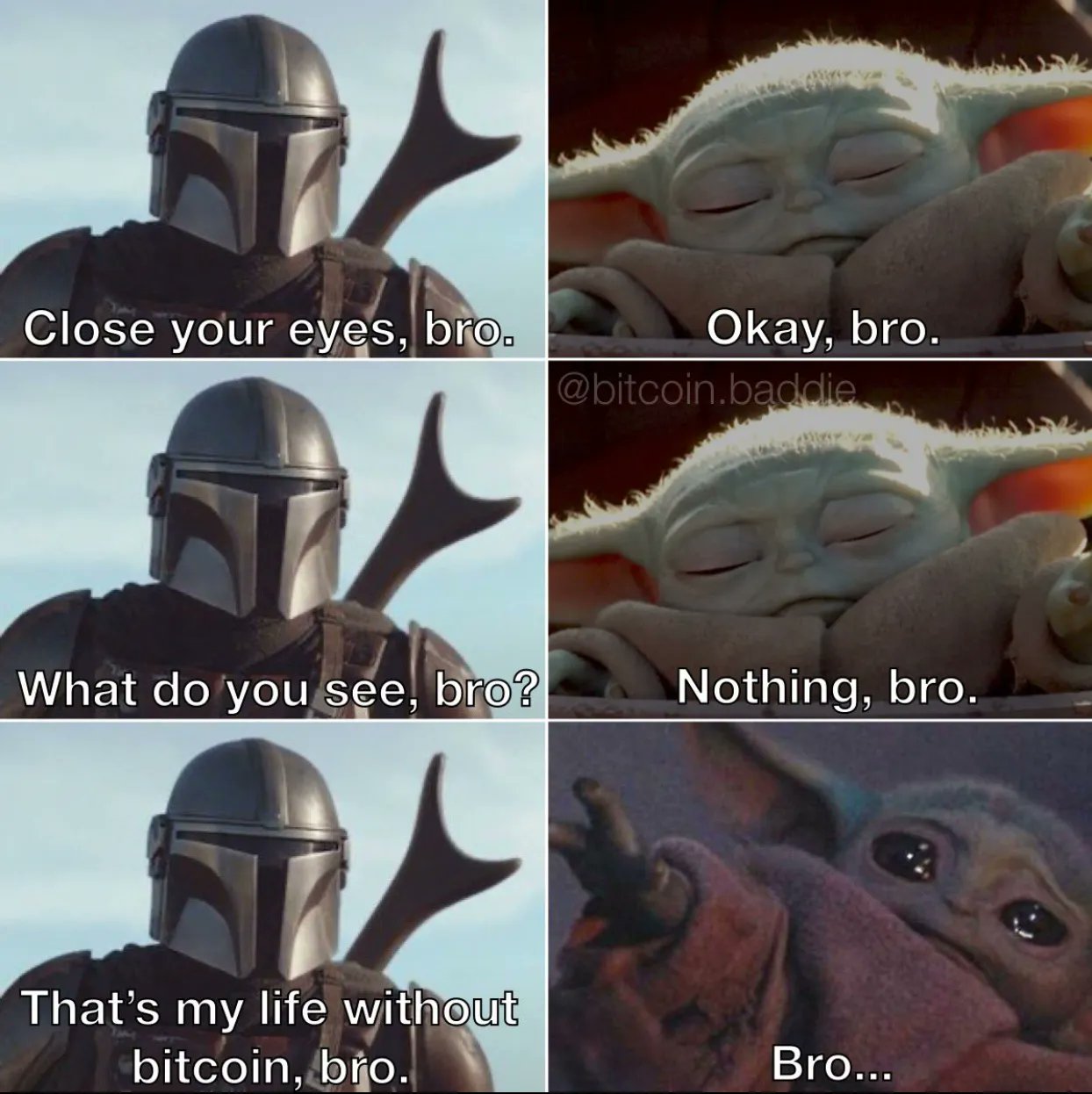 Graham here, the CEO of Voltage. This is a big question with many parts but I’ll try to answer the best I can (it’s going to be long). There’s two very different pieces of this question, the regulation aspect and the technology & custodianship. First off, the definition of custodianship is somewhat murky. There’s always a “yeah, but” to it. Before Bitcoin, your options were to hold cash or put it in a bank (custody). Now we have an amazing new technology that gives us the benefits of those bank type solutions (and more) with an entirely new way to control our money. The invention of Bitcoin has made custody not so black and white. There’s the really obvious example of custodians, like Wallet of Satoshi, then there’s things like trusted swap providers. Are those custodial because they own user funds while swapping? There is a huge spectrum to this from your own cold storage to Coinbase. To your point, if Chase bank uses AWS for hosting and AWS could get into their RDS instances to get user credentials or move money, does that make them a custodian? I’d say no, but they’d probably be considered a trusted 3rd party. The biggest conversation here is really around Trust.

For the technology aspect, it’s impossible to do hosting without trust. You gotta trust GoDaddy to keep your website up. No matter the provider (Voltage, Greenlight, etc) you gotta trust the provider to keep the node online. You gotta trust the provider to do the right thing and keep things secure. At Voltage we’ve gone to great lengths to achieve this. We’ve submitted many PRs to LND to enhance its security, like TLS key encryption, Tor key encryption, and more. We aren’t just throwing LND on some VPS and calling it good. There’s no sensitive data on disks or in our databases that’s readable by us. We do keep encrypted backups of some things like seeds and macaroon, but those are encrypted client-side so we never know them. Now, one of your points is around keys for a lightning node. Node keys live encrypted in the node’s database. When a node starts up it must be unlocked by the user with a password that they’ve set and we don’t know. At that time the keys are held inside of the LND process for the duration that process is living. The memory itself from the underlying server is encrypted as well with keys Voltage does not have access to, so the node keys are never living outside of an encrypted space. Of course, some people might want keys running in a different location, ala Remote Signing. This is a great start, but doesn’t fully remove trust from the hosting provider. In today’s remote signing implementations, you still have to trust the hosting provider that the requests that are being sent to the signer are honest. Even with a Watchtower, if your hosting provider is running the Node and Watchtower, then they just shut down the Watchtower and broadcast an old state. To get to the most trustless deployment of ‘node in the cloud and signing outside the node’ you’ll have to run a Bitcoin full node on the signer as well as the node to verify everything. This gets very complicated very fast and a million different ways to deploy these things. In summary, if you want trustless and totally ‘noncustodial’ you gotta do it all yourself. From there, there’s a huge spectrum of trust tradeoffs that just go back to the individual to decide. We offer remote signing as well as other providers, so everyone’s just gotta do what’s best for them. Final point on this is, we’re working hard to make all this better. More hosting options, more signing options, etc. The nodes product we have today is very much a ‘v1’ and the nodes product we’ll have in the months and years to come will be very different.

Now the regulation piece. We’re operating in a brand new space and all of Bitcoin is moving faster than the law can keep up. We have a legal team we work with and we feel totally fine on our regulatory position. Additionally, it’s something we always keep our eyes on. I don’t think there’s any ‘time bomb’ there, especially when you see the other products and services out there. I won’t name names to be respectful, but there’s lots of Bitcoin companies that are very clearly MSBs and are operating without the proper licensing. We’ve got a lot of armchair lawyers in Bitcoin and ultimately it’s up to each company to consult their own legal team, abide by the law the best they can, and watch for clarity as it comes.

Again, this is a big topic and I can rant on, but I’ll stop there. I think the main part of your question was around VPS hosts and what happens when you put your Bitcoin keys on it. I think that depends on a ton of factors, but for us, we try to encrypt everywhere so it's more than a standard VPS deployment. There’s trust and tradeoffs all over the place, everyones just gotta find their balance.

Strike is getting into unicorn territory with this raise (they may already be there).

Making it invisible. Onboarding a normie in a simple way nowadays is difficult because you will stumble with the problem of them not understanding on-chain vs lightning in minute one. And then you need to spend 30min at the whiteboard just for them to be able to know which menu they should pick in Muun.

We need to abstract more things away until it's dead simple. I'm hoping that Federated Chaumian Mints deliver their promises on this area.

open source software doesent get anywhere on its own. Having a company that can "advertise" / integrate / make it mainstream, can be a good thing. But im honestly just trying to be contrarian :)

Am I dumb or does that mean this UTXO is unspendable now?

Even though it's only 13,300 sats. But he did use the bigger UTXO for the OP_RETURN.

He used an output with 0 sats for the OP_RETURN. Interesting. So he paid for it with the fees since it's now a bigger transaction.

Damn, I still need to learn a lot, lol

They should use SN job posting 😁

you can use https://opreturnbot.com/ to post message on blocks, pay with LN

@k00b bring Saylor for AMA on SN But don't let him to take all the sats :)

Yes, this is a great way to stimulate a net positive outcome for everyone! A win for users because they walk more and live longer and healthier lives. A win for health insurances, because they reduce cases and other claims, with reduced health risks of their clients.

Health insurances in most countries operate on a legacy software stack and slow decision making. At the same time I believe that mid term, insurances will transform. The best incentive for a healthy lifestyle is Bitcoin (much better than any points program, or reduced insurance rates).

Awesome! The only thing keeping it from being my ideal browser is the shitcoinery. I hope they drop BAT and add Lightning integration in the future.

135 sats \ 3 replies \ @cryptocoin 27 Sep \ on: New York Times: Currencies Around The World Are Tumbling. Except Bitcoin.

An archive of the article is here. An archive has no paywall, no subscription requirement, and can be easier to read.

It still not so reliable, there's many payments that fail and on the node's side there's still many failures that lead to force closed channels. I believe both issues are being solved progressively, but imo that's 2 of the most important. Before having hundred different features, it should be robust and reliable.

Brendan mentions in interviews that they started building on bitcoin, but the fees were too high (his words, not mine). In my opinion, I simply think they wanted to fund raise with their own token, just like most issuers of shitcoins. i agree with you - there is no need for BAT now that we have Lightning.